Cusco is one of the most magical cities in the world. It has a different atmosphere, almost energetic, difficult to explain.

It is the gateway to Machu Picchu, one of the new wonders of the world. It also stands out for its incredible streets, buildings and several of the most impressive archeological sites in America.

Cusco is located in the Andes, at 3,400 meters above sea level. Its original name is Qosqo, navel in Quechua, since it was the capital of Tahuantinsuyo (Inca Empire). During the time of the viceroyalty, he also stood out as one of the important cities of his time.

Without further ado, we are going to narrate our experience both in the city and in the archaeological sites of the surroundings. We speak about Machu Picchu in this post in more detail.

1st day in Cusco (historical center, museum of the site of Coricancha and regional dances)

The first day, as we arrived from Lima in the morning, we took the opportunity to visit the center of Cusco, relaxing in these streets with so much history in each of its buildings, stones, … We also hired the tours through the archeological sites and bought the tourist ticket to enter them (information and tourism office, Av. 103 Office 102).

And to our surprise, the first thing that we found at the height of the Main square was a festive parade. The first dancers dressed very colorfully, with the colors of the frigate bird, red and white, that give the color to the flag of Peru.

The following ones were more “special”, they represented to nice drunks; Nose and rosy cheeks, bottle in hand and unsteady walks.

We continued our journey through the center and the next thing with what we found was a landmark in the ground that marked the direction of the ‘Suyos’. Chinchaysuyo, Antisuyo, Qollasuyo, and Kuntisuyo were the regions in which the Inca empire was divided, or Tahuantinsuyo, being Qosqo (navel) the center of the same.

Once in the Main square, we were able to marvel at the buildings that surround it, the main one being the cathedral. After observing it from the outside, we went in and walked the whole, is what we liked the choir, with its spectacular stone carved wood and the great music stand located in the center.

We also visit the Church of the Company of Jesus (Jesuits), which is also in the Main Square. Once we saw her, we went up one side of the square looking for a restaurant. It is from here where we had the best views of the square and the church.

We have lunch at the Sumaqcha restaurant, number 339 on Sweden Street. It is a totally recommendable place. We ordered trout and guinea fowl, both typical dishes from the mountain range, and they were spectacular. Good portions, good quality, and an adjusted price.

After eating, and having an ice cream in the Main Square, we continue our visit to one of the most photographed places of Cusco: 12-angle stone. It is incredible the work that the Incas did centuries ago to fit so accurately several large stones, more even with the tools they had.

Our next destination was the Coricancha site museum, located under the temple gardens. We visited before the Coricancha because one of the tours we hired was already included with a guide.

In this museum, we could see the origin of the civilization that inhabited Cusco, models of the origin of the Coricancha, different archaeological remains of the area: ceramics, textile remains, instruments, sculptures, etc … You can also see some mummies and deformed skulls (elongated), which belonged to the ruling class. This shape of the skull was achieved by compressing the head of children with different fabrics.

Once we leave the museum we continue our journey through the streets of this beautiful city, which mixes an Inca past with a colonial one.

At 18:00 we approach Qosqo Native Art Center, included in the tourist ticket. We went with enough time, 1 hour before the first session, as large queues form and the theater is not very big. Here we could see live folk dances of the region of Cusco, rich not only in archaeological remains.

Back to the hotel, on the same street as the theater, we could see several murals depicting the history of Cusco. They are not great works, but they complement the charm of the city.

After resting for a while in the hotel, we went out again for dinner in a restaurant. Just after arriving at the Main square we saw that there is also a Papachos in Cusco. This is a restaurant by famed Peruvian chef Gastón Acurio. Its specialties are hamburgers, ribs, chicken, … but Peruvian style, with excellent raw materials and recipes based on typical Andean cuisine.

A few drinks in the center and we went to sleep, the next day we would start very soon with the visits.

We got up early and went down to breakfast. The hotel was an old colonial house, so we could enjoy breakfast in the same inner courtyard. We took strength for the trip with a coca mate, Andean cheese, scrambled eggs and bread.

Almost at the time, the minibus of the agency appeared and we began the trip to the Sacred Valley of the Incas, heading first to Ollantaytambo.

During the journey of 90 km, we stop at various places to take pictures and, as in any excursion, to see local shops and markets. Prices were usually more expensive than in Cusco (or Lima), so unless you see something that catches your eye we do not recommend buying there.

And finally, we come to Ollantaytambo, key location in the control of the sacred valley.

If you look at one of the mountains in the valley you can observe, with a little imagination, the face of the Inca.

And, just in front of the archaeological zone, you can see the deposits that were used to store food. Due to the wind that runs through the valley, to the shaded area and to the great walls the food remained in good condition longer.

Climbing the steep stairs, you reach the ceremonial zone of this settlement. This part is one of the best preserved.

There you can see a wall with the Inca cross carved in it. This was the ceremonial altar and, like all the Inca constructions, the stones that conform it fit perfectly.

Ollantaytambo we liked. It is not as grandiose as the citadel of Machu Picchu, but it has its charm as well.

We continue the trip back to Cusco and we passed by the archaeological site of Chinchero . In this place you can see the ruins of an Inca temple and, in contrast, a colonial church opposite.

Once in Cusco we had dinner, walked around the Plaza de Armas (main square) and we could see that even at night it still maintains its charm.

This day we take it calmer taking advantage of that the most excursions of the tour that we contract are realized after the lunch.

We started the morning a little later and took a leisurely walk around the center of Cusco. During this walk, we visited craft markets where we could find: chullos (Andean cap), baby alpaca scarves, nativity inside pumpkins, tumis (ceremonial Incan knife), zampoñas, and kenas (Andean flutes). We bought some souvenirs to take us to Lima.

Once we had lunch, we arrived at the hotel and waited for the agency van to start the tour.

First, we went to the Coricancha or convent of Santo Domingo , in the heart of Cusco. This place is not included in the tourist ticket, so you will have to pay 10 soles to enter (almost 3 euros).

The guide explained the story. First, the name, which means golden enclosure. The temple was home to several temples and walls covered with gold, according to the chroniclers.

Already inside we were seeing the mixture of cultures. On the one hand, there were the remains of several Inca temples, such as the temples of the sun, moon, and rainbows.

We could also see a representation of what is believed to be the high altar of the Temple of the Sun.

On the other hand, the typical dependencies of a colonial convent: period paintings, coffered ceilings, the cloister,…

Already at the end of the tour, you can see the solar garden and beautiful views of the hills located on the outskirts of Cusco.

We continued our tour and we headed to Sacsayhuaman, one of the most representative places of Cusco. It is located to 2 km of the city, the reason why it took little time to arrive.

The view of the place is breathtaking. It is an ancient fortress that protected the city of Cusco. At present, it remains in the place part of the 3 walls that existed since the place was used as the quarry of stone for other constructions. Likewise, the place is great.

The stone blocks are impressive, weighing the largest of them about 140 tons.

It also impresses how they managed to fit stones of this size so perfectly with the media of that time.

If you are lucky enough to visit Cusco at the end of June, we recommend you buy tickets to see the Inti Raymi (Feast of the Sun). Every year, for the winter solstice (June 21), there is a representation of this ancient Inca party with hundreds of extras and professional actors. In Sacsayhuamán it is represented most of the event, so you need these tickets to enjoy the recreation of the feast.

We continue our journey to Tambomachay, 10 km from Cusco.

As it is a tourist site you will find vendors of all types and villagers with llamas or alpacas for the corresponding photo. We could not resist …

We continued the trip and, on the way to Qenqo, we stopped for a moment to take a photo outside of Puca Pucara. We did not get in as it does not have as much interest and looks better from the outside. Puca Pucara is a fortress on the outskirts of the city.

Instead, Qenqo, it has more history. It is an ancient temple in the form of an amphitheater and whose altar is on an underground grotto. The exact meaning is unknown so far. 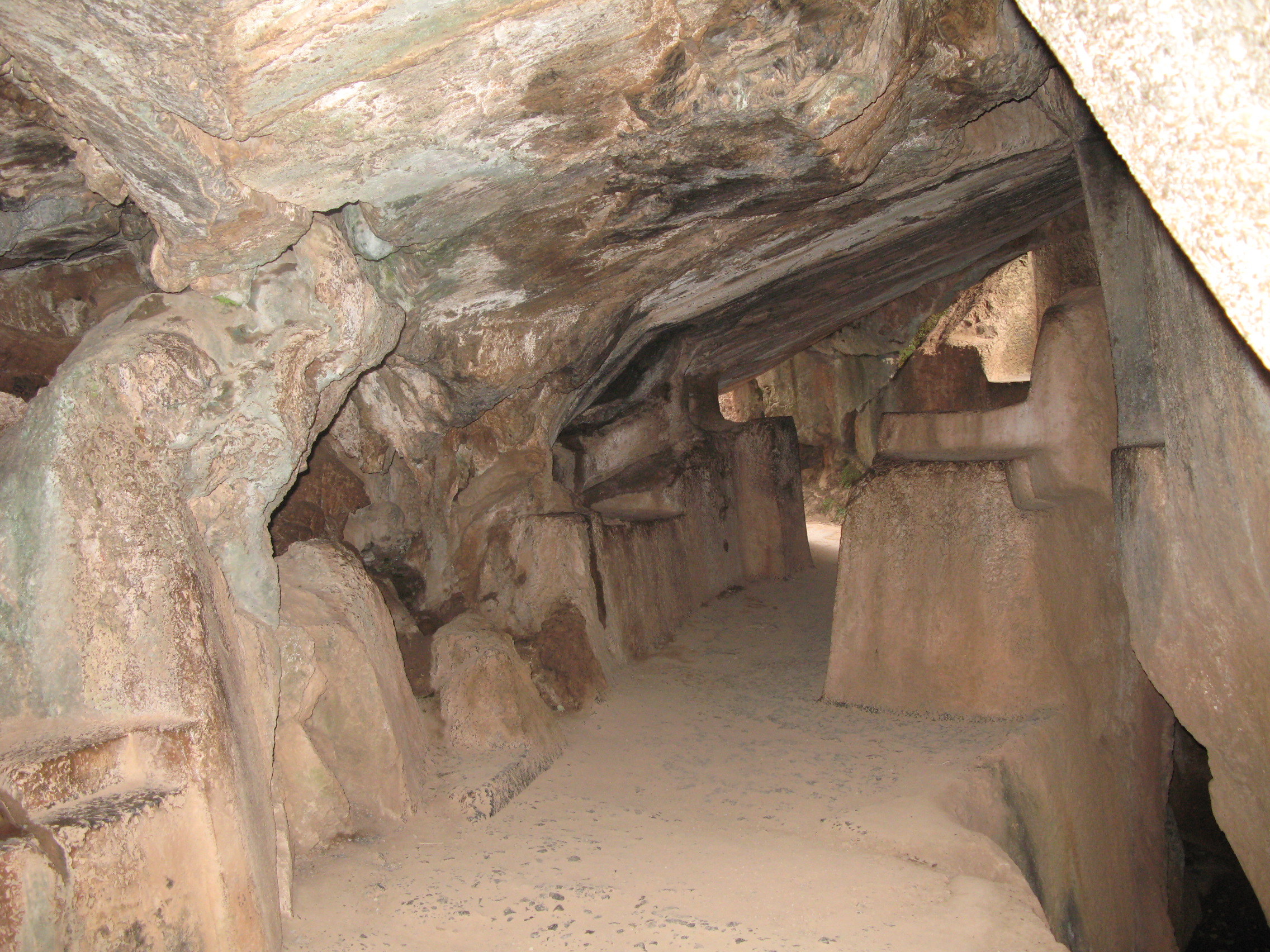 In Cusco, we went straight to a restaurant to have dinner and to sleep. It had been a rather tired trip.

We already flew back to Lima, we did not have any more vacation days. We were able to visit the main tourist sites but we missed seeing some: Pisac, Moray, the statue of Pachacutec and the regional history museum. For us, they were less priority, but you may have another criterion.

For reference, we show below a small summary of them in case you’re luckier than us and have time (all are included in the tourist ticket).

We loved the magic of this city and its archaeological sites, perfect complement of a trip to one of the wonders of the world: Machu Picchu.

Configure your travel now and enjoy one of the best tourist destinations in the world.

This error message is only visible to WordPress admins


Error: API requests are being delayed for this account. New posts will not be retrieved.

Make sure this account has posts available on instagram.com.

Error: admin-ajax.php test was not successful. Some features may not be available.

Please visit this page to troubleshoot.