Cordoba, year 1000, with its more than 500,000 inhabitants, is one of the commercial and knowledge centers in Europe. Mathematicians, philosophers, doctors … came to this city to improve and/or share their knowledge. Neither Rome, London nor Paris, in their time, approached their splendor.

Today you can enjoy its neighborhoods, monuments and archaeological remains from that time, as well as new and varied cultural and leisure offers. Cordoba is one of the most vibrant cities in southern Spain.

When to visit Cordoba?

Located in the interior of Andalusia, it is one of the cities that reaches higher temperatures in summer. This is why your visit is recommended in spring and autumn, without the oppressive heat that can be found between July and August.

Cordoba is well connected, both by train (AVE, Alvia) and by road (highway N-IV).

Where to eat in Cordoba?

In Cordoba there are countless bars and restaurants where you can have a cold beer, a wine, a soft drink … all accompanied by the tapa of the place.

Here we indicate the sites recommended by a friend from Cordoba (he was very successful):

In addition to these you have a lot of taverns and restaurants in the downtown area where you can taste the main dishes of the area: salmorejo, ratatouille, oxtail, flamenquines, etc…

Rates and schedules of visit to places of interest

Keep in mind the following schedules and rates to plan your trip well:

You also have a tour that includes tickets and a guided visit of the following places of interest: Mosque-Cathedral of Cordoba, Alcázar de los Reyes Cristianos, the Jewish quarter and the Synagogue. The price is 40 euros per person (under 8 years free).

Visit of the city of Cordoba

The visit to the city was made in a day, as we were passing through. However, we had time to see several of its most important tourist sites.

Located next to the Mezquita-Catedral, it is made up of a endless narrow streets that run irregularly through the center of Cordoba.

Even today you can see in some of its decorative elements the Star of David, unmistakable symbol of the Jewish faith.

In some streets you could glimpse from the outside some of the typical Cordoban patios, with its walls full of flower pots.

It’s a small and narrow street but you must go through it, as it has that decoration typical of Cordoba.

If you are located in the extreme part of the alley, you can see the belfry (old minaret) of the Mosque-Cathedral.

After touring and enjoying the narrow streets of the city center, we arrived at the Mosque-Cathedral! It is undoubtedly the tourist place par excellence of the city.

We bought the ticket (10 euros) and we entered inside the Mosque-Cathedral. As soon as we crossed the door we were amazed by the views… What impressive arches, spaciousness and color we had in front of us!

We continued the visit and we were able to check in person because it is called Mosque-Cathedral: the mix between the elements of a Christian temple (Cathedral) and Muslim elements (Mosque) is constant.

In one of the sides of the mosque is the Mihrab, which is a small room located in the mosques to indicate the place where you should look when praying. It should be noted its decoration based on geometric motifs and writing in Arabic (Islam prohibits the representation of Allah or his prophets with images).

And not only the walls and arches are worthwhile, the ceiling decoration of the Mosque is just as spectacular.

In the area of the Cathedral, we could see the altar and its pulpit, as in any other Christian temple…

…as well as different chapels, such as the one of San Juan de Avila.

… and a decorated ceiling in a very different way from the part of the Mosque.

We finished the visit of the interior of the Mosque, but we did not want to stop contemplating it from the outside. Still today you can see old doors decorated in the style of the time.

Built in the 1st century BC It is another of the tourist and iconic places of Cordoba. 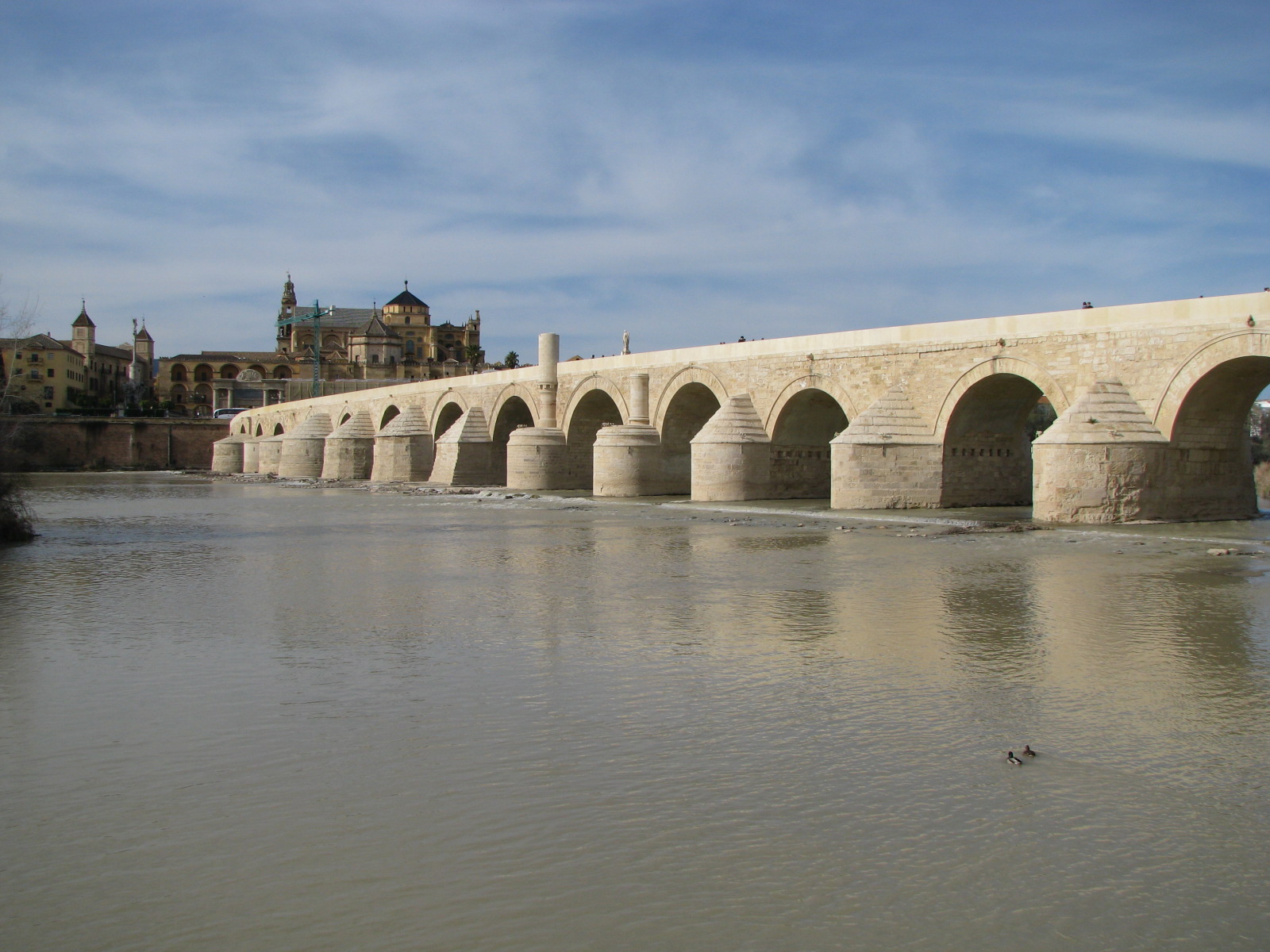 Link the southern neighborhoods with the city center, which is separated by the Guadalquivir river.

Not only stands out for its architecture, but on the same bridge there is a great atmosphere. Cordoba and tourists are mixed with various groups of musicians that give a very special atmosphere.

In one of the ends is the Gate of the Bridge, which served as access to the south of the city (the walls are no longer).

At the other extreme is the Calahorra Tower, whose function changed over time: prison of the Cordovan nobility, barracks and girls’ school. At present it has become a museum of the history of Al-Andalus.

5. Triumph of San Rafael on an obelisk

Located halfway between the mosque and the bridge, you will find the Triumph of San Rafael on an obelisk. It is not the only one, several monuments were erected in honor of the archangel San Rafael as custodian of the city when remitting an epidemic of plague.

Located 8 km from Cordoba, this place was the power center and Almohad recreation village in the Caliphate of Cordoba.

However, 1,000 years after its abandonment, there is little to see in this place. The most noble materials and most important artistic groups were “transfers” to other buildings and monuments in the southern area of Spain: Alcazaba de Malaga, Sevilla,…

Within this enclosure you will see the history of the construction, splendor and decadence of this city… as well as all the work of recovery that was made of the place.

You can also see different archaeological remains of the time: capitals, vessels, kitchen utensils,… and dioramas and videos explaining life at that time.

Once you finish the visit to the museum, you take a bus (it’s 2.10 euros round trip) to the archaeological site where Medina Azahara was located, on the slopes of Sierra Morena.

Once there we started the route going down to the area of the main viewpoint, from which the surroundings of Cordoba could be seen.

We keep going down and going through the different streets that formed this village until we reach the main area, where we can highlight the whole archaeological site that still retains part of its past splendor.

House of the Pool

We finish the visit with mixed feelings. On the one hand, we liked the explanation that was given in the museum, the views from the viewpoint and the sets of arches. On the other hand, we feel disappointed by the few archaeological remains and the average quality of them.

Cordoba left us wanting more. We loved touring its alleyways full of color and good atmosphere. We enjoyed their terraces, their food, the good weather and above all we enjoyed the night walks on the Roman bridge.

As we could not see all its monuments, now we have another excuse to visit it again because, as they say, we have left something for the next trip…