Portada » The story of Princess Kristina of Norway.

The Princess Kristina of Norway is not unknown to lovers of medieval history. A story with all the ingredients of the time: marriages of convenience, relations between kingdoms, fights for the throne, royal comitives, alliances, religious offerings to saints, …

If you wonder how a Scandinavian princess could end up buried in Covarrubias, one of the origins of the kingdom of Castile, in the following lines we tell you in detail …

Origin of Princess Kristina of Norway

Kristina Haakonardóttir, princess of Norway, was daughter of Haakon IV, a powerful and admired Norwegian king of the Viking era.

Born in Bergen (Norway) in the year 1234, she was 23 years old when her father engaged her in marriage. It was quite high for the average of Castile in those years since it is half a meter seventy high. Also attractive, according to the chronicles of the time.

Without another option, since at that time the marriages followed political objectives, the princess accepted her destiny in the Kingdom of Castile. More specifically in Seville, where she would live with her future husband.

As we said, the marriage sought to meet political goals of the 2 kings involved. It was the best way to ensure, through blood ties, loyalty and support in their own causes.

On the one hand, Alfonso X the Wise secured good support to fight for the throne of the Holy Roman Empire. In the case of Haakon IV, this king secured access to the wheat and wool of Castile, in addition to being related to one of the firm candidates for emperor.

Kristina, without voice or vote, had to settle for living in a city with good weather, much milder than Norwegian, and being married to an infant in Castile.

Trip to the kingdom of Castile

The trip begins in 1257 in the city of Tönsberg, near Oslo. They sail in the famous Viking ships until arriving at the coast of England, in Yarmouth specifically. It is there where they decide to cross to Normandy and continue the journey by land.

On the change of route on the trip, there are several theories: the presence of pirates on the north coast of Castile, dizziness in the sea of the Castilian bishop who accompanied the entourage, … Be that as it may, at the end Princess Kristina of Norway crossed France to reach to the kingdom of Castile via the Kingdom of Aragon.

It is in this Kingdom that is received with honors in Barcelona by Jaime I the conqueror. It is even believed to propose marriage to the princess.

Wedding of Princess Kristina of Norway

Some stories say that, initially, was on his way to marry King Alfonso X the Wise. Apparently, Mrs. Violante, the queen of Castile, could not give an heir to the king. Something dangerous for a monarchy at that time.

However, , in the end, the queen became pregnant, so the wedding had to be agreed with one of the king’s brothers. Infant Felipe was chosen.

The wedding was held with all royal honors on on March 31, 1258, at the Collegiate Church of Santa María (Valladolid). 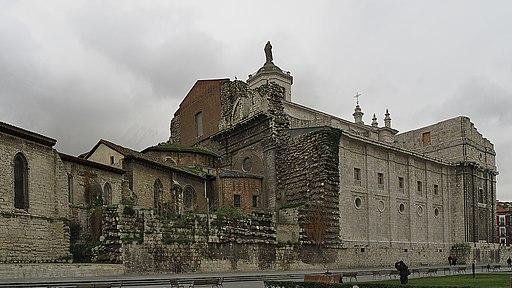 Her life in Seville

She settled with her husband in court, who was in Seville at the time. City that began to flourish as one of the most important cities in the kingdom of Castile.

He lived here for 4 years and, according to the stories, without ever getting used to his climate and customs so different from those of his native Norway.

Until in 1262 she dies prematurely. The reason for his death is not clear: poisoning, meningitis, melancholy … Only assumptions.

Burial does not occur in Seville, but is buried in the beautiful medieval village of Covarrubias, since her husband was abbot of the Collegiate Church of Covarrubias.

Discovery of the tomb of Princess Kristina of Norway

Princess Kristina of Norway was buried in a grave with luxurious clothes and valuables. That is why, in 1958, during a study of the sepulchers of the collegiate church of San Cosme and San Damián, the remains present there could be associated with a woman of high lineage.

Moreover, his blond hair and his great height, atypical in the kingdom of Castile at the time, told investigators that it was Princess Kristina of Norway.

One of the promises she asked her husband was to build a church in honor of St. Olav, patron of Norway. Although it was accepted by Felipe, it was never fulfilled either in life or in the years after his death.

Until in 2011, in the 21st century, a hermitage in honor of St. Olav on the outskirts of Covarrubias (Burgos).

This beautiful and striking hermitage has been possible thanks to the cooperation of the Government of Norway, the Junta de Castilla y León and the municipality of Covarrubias. Not forgetting the volunteers of the non-profit association “The brotherhood of St. Olav”, who keep it and show altruistically during the spring and summer weekends.

A life worthy of being written and remembered, as did the writer Espido Freire with her book on Princess Kristina of Norway (Buy the book “La flor del Norte” at “La Casa del Libro”).

Also, if you liked this beautiful medieval history, do not miss visiting the places that Princess Kristina of Norway toured: