Portada » A visit to the leaning tower of Pisa.

Pisa is a well-known tourist destination in the world. Its main attraction is the famous leaning tower of Pisa, unique in the world. Although it can also boast of its cathedral, the Baptistery of San Giovanni, museums …

In addition, for its situation in the northern part of Italy, it is an unbeatable tourist option as part of a trip through this area of the country: Florence, Bologna, Venice, …

Do not think too much, prepare your trip to Pisa, and rest of Italy, taking into account the advice we give you below.

There are several options to get here:

2. When is the best time to visit Pisa

Although it depends on taste, the most recommended stations to visit Pisa, and the region of Tuscany in general, are spring and autumn. At that time the temperatures are mild and there are beautiful views in the countryside.

Summer is not a bad time either, the only thing that can be quite hot and hotel prices are higher. The winter is colder and rainier, so it is less advisable unless you like the snowy landscapes.

Since it is a tourist site, you will not have any accommodation problems. There is a variety of apartments, houses, hotels and hostels of different prices at your disposal.

However, since there is not much to see in the city, we recommend that you see the option to stay in Florence and get closer on the day to Pisa to see the leaning tower. Another option is to visit it on the way, without staying there, as part of a circuit through the center-north of Italy, such as: Rome-Florence-Venice-Pisa-Rome.

4. What places of interest are there in the city of Pisa?

While the leaning tower and the cathedral are the main tourist attractions, there are others that should also be highlighted:

It is the most important tourist square in the city. Formed by gardens and surrounded by ancient walls, here is the famous leaning tower, the cathedral, the baptistery, the holy field and several museums.

The tower, built in the 12th century, has 8 levels and a height of 58 meters. It is famous for the inclination that was taken from the moment of its construction (fruit of the marshy land where it sits). Currently, the tilt it reaches is 4 ° and there is no fear for its collapse.

It should be noted that it is not a tower without a specific purpose. Actually is the bell tower of the cathedral of Pisa, which was built outside the structure of the temple.

And, like most tourists, we could not resist doing a photo holding the tower …

The cathedral of Pisa

Of Romanesque style, it is the main temple of the city and one of the most important in the northern part of Italy. It is a sample of the past splendor of this rich region.

It is the baptistery (chapel for the sacrament of baptism) largest in Italy. Contrast its simple interior with the grandeur and exterior decoration. At the top of its dome stands the statue of Saint John Baptist (reaching almost the same height as the leaning tower). 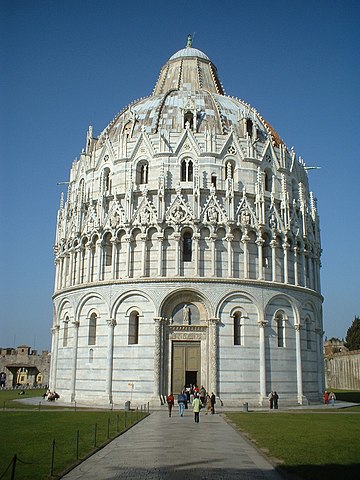 Monument in honor of the wolf that, according to the Roman mythology, nursed Romulus and Remus (founders of Rome).

Museums and other places of interest

The city has a good number of museums where to enjoy Italian art and music, the main ones being:

In addition, it has other spaces of interest to visit.

In addition to the typical pizzas, pastas and ice cream, in Pisa you can find other exquisite culinary varieties:

6. Nearby cities to Pisa

The privileged situation of the city of Pisa means you can visit other nearby places on the same trip: